Cape Town is the dream destination for any diving enthusiast. The stunning coastline is simply full of thrilling and beautiful diving spots. Read on to explore the top diving spots in Cape Town. 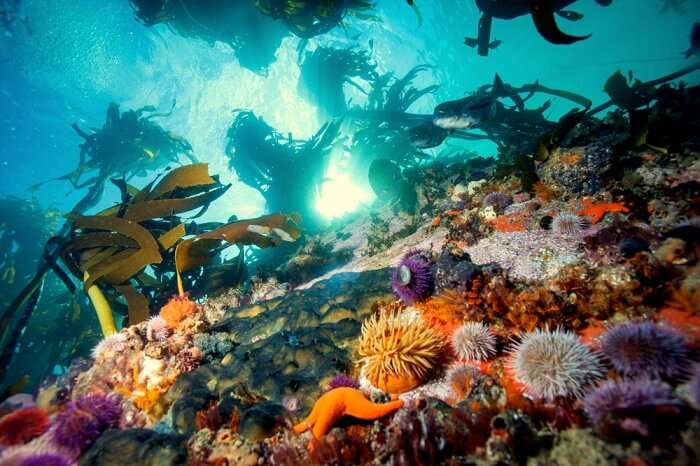 This wreck dive isn’t that deep at more than 8 meters, but it’s still a really interesting spot. The 8000 tonne Safmarine Freighter, SS South African Seafarer, was wrecked on a summer day in 1966. On the 1st of July, it hit the north westerly gale just in front of the Green Point Lighthouse. Luckily all the crew, together with the passengers, were rescued on the same day by helicopter. The same cannot be said for most of the cargo, which was taken by the wind and currents when the boat was destroyed.

Today, this is one of the most exciting wreck dives in Cape Town. It rests on a rocky reef in the Green Point area on the Atlantic seaboard of the Cape Peninsula. The area is exposed to the south west swell, and the reefs are rugged. Experts recommend diving here only when seas are flat, so be sure and check the forecast and wind directions. Conditions in the area are known to be at their best during the summer, but it is still a year-round diving site.

There is a wide range of fish species along the coast outside Cape Town, as well as seaweed and invertebrates. False Bay is occasionally host to visiting fish coming in from warmer regions. Even turtles have been spotted in the bay, brought in by the east coast current. You might be able to spot them when diving at East Shoal, or one of the other spots in the bay. This beautiful offshore rocky reef site in False Bay has a depth of about 25 meters, and is said to be made of Table Mountain sandstone. It is not the most frequently used diving spot, as it is a bit far from the nearest launch site. However, the marine life is amazing, with an astonishing density of echinoderms. Much of the reef is covered by a mat of brittle stars.

It is known that great white sharks feed at nearby Seal Island. It is several kilometers away, and scuba divers have not reported sightings of these big fishes at East Shoal. However, it could be wise not to hang around in mid water or on the surface for long. Decompression dives are not recommended here for this reason. If you do want to dive with sharks, there are many options for joining organized shark diving trips in South Africa. 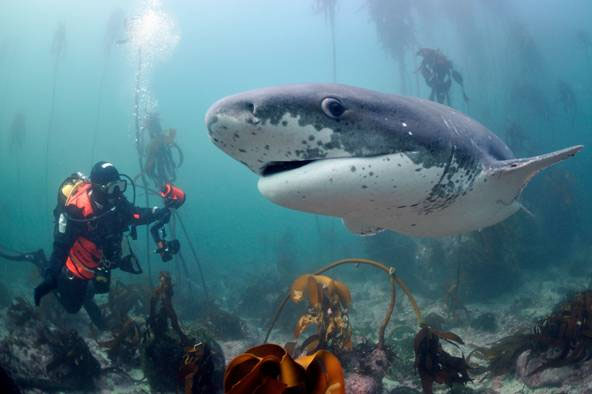 Further up the west coast you will find this shallow reef, just below Chapman’s Peak. Even though it is close to Hout Bay Harbour, boat access is necessary. The big plus, which makes it an extra exotic experience, is that it is suitable for night dives. It is also one of the few areas where the granite reef is not rounded due to weathering. You can actually see them from the cliffs above the site. Maximum depth in this dive spot is approximately 17 meters. When it comes to marine life, there are a lot of kelp on top of the reef, and a variety of invertebrates on the rocks.

Another prime diving spot accessible by boat is Sea Point Ridge Pinnacles in the Western Cape province of South Africa. The name itself is basically a geographic description. The bottom, with a maximum depth of 27 meters, is low flat rock reef. The only ‘interruption’ of note in a large area, are the pinnacles. They rise up from the bedrock and are about 25 meters. Here you can find a sparse Laminaria kelp forest. The upper parts of the sides are also heavily encrusted with black mussels. Further below you can find all sorts of creatures, like sea urchins, scattered sponges, strawberry anemones and colonial ascidians.

When it comes to diving conditions so far out from the shore, just be aware that it is exposed to wind and waves. It is recommended to dive here when the westerly swells are low. Alternatively, conditions are often good here after strong south-easterly winds, as it reduces the swell and often brings clear cold water to the surface. It is usually best to dive here in the summertime, but there are opportunities at other times of the year as well. Be aware that the site is a Marine Protected Area, so you will need to get yourself a permit.

If you are more in the mood for a shore dive, this might be the place for you. This reef dive is accessible from the shore or by boat, and the maximum depth is approximately 17 meters.It gets it name from a large rock which has a small dark recess on the inshore side. This looks kind of like a door of an old wood-burning baking oven, or a typical pizza oven. This is a quite an interesting dive spot due to its large granite outcrops and boulders with several overhangs and a few small caves. The rock itself is a large one, and shoots up from the water making it a notable landmark.

The coast of South Africa has a wide range of diving sites, with everything from colorful tropical fish to rocky reefs and shipwrecks. The inlands are normally used for training and cave diving. Although exotic and exciting, diving in South Africa can in general be quite physically challenging. The water can be cold, with big swells and strong currents, but this is all part of the challenge, right? The best advice is to get in contact with one of the many diving companies in the area. They know the location very well, and can help you with everything from diving conditions, permits, marine life and more.

After an exciting day out spent diving, the Radisson Blu Vendome Hotel, Cape Town offers comfortable accommodation in the Sea Point suburb of the Atlantic Seaboard precinct. Gaze out to the sea and plan your next unforgettable dive!

Processed Food and How It Impacts Your Health

View all posts by zieffphoto →